Providing you the tools you need to make appropriate nutrient and fertilizer-based recommendations – it’s what we do. Whether you have recently purchased an Agronomy 365 subscription, or you are looking for agronomic answers, we’ve got what you need. See below our most frequently asked questions answered. 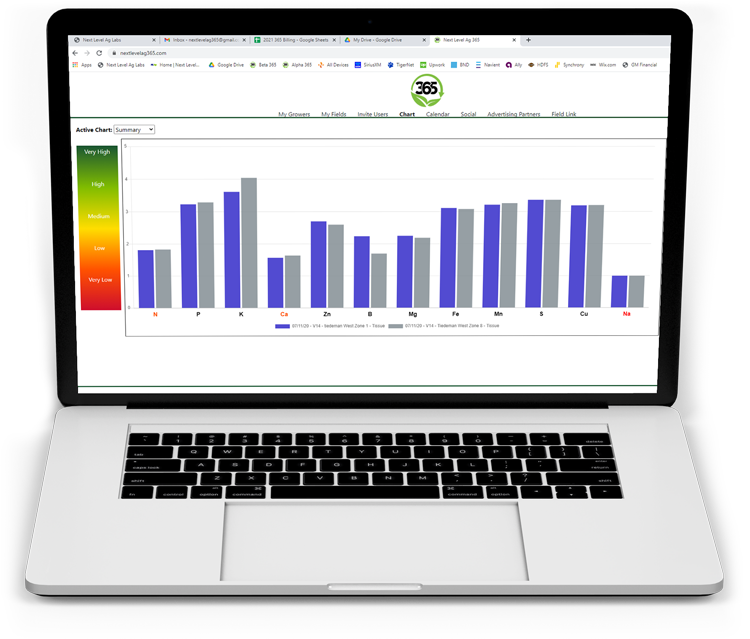 Get the most out of your Agronomy Dashboard or Agronomist Membership subscription.

Why do I need to register on both the Next Level Ag Dashboard and the Agronomy 365 Dashboards?

Both dashboards work hand-in-hand. The Next Level Ag Dashboard powers the Agronomy 365 Dashboard. The Next Level Ag Dashboard is where you will submit your soil and tissue samples, see the progress of sample analysis, and be notified through this dashboard once your analysis has been complete and your data results are ready to be reviewed on the Agronomy 365 Dashboard.

I've purchased the Agronomy 365 Dashboard Subscription, now how do I get registered on the Next Level Ag Dashboard?

Please note that if you are already a customer of Next Level Ag you will not need to create a new account for the Agronomy 365 Dashboard. Go ahead and sign in with your Next Level Ag Dashboard login credentials.

Once you’ve successfully enrolled in the Next Level Ag Dashboard, please head over to nextlevelag.com to get registered for the Agronomy 365 Dashboard.

Recently purchase the Video Series or a Consulting Hour? Here’s what you need to know.

How do I purchase a Video Series Membership?

How do I log into my Video Series Membership?
How do I book an Agronomy Expert Consultation?

Special Note – You will receive a reminder text and email 24 hours prior to your consulting hour to send any field data information needed for your consult.

Have questions about collecting and submitting your samples?

For further information on how to review your latest soil or tissue report please see this tutorial:

Please submit your soil and tissue samples through the Next Level Ag Dashboard.

In addition to this, please identify the following on the sample packaging:

Curious about maximizing your production practices?

How do I identify high yield bean plants at V4-V5 from their structure?
During the V3-V4 growth stages, a dramatic increase in the number of nodules visible on roots takes place, whereas, in the V5-Vn growth stages, lateral roots extend up to 15 inches away from the main stem and grow to the center of a 30-inch row. Branches will begin developing on the lowest nodes and the total number of nodes that the plant may produce is set at the V5 growth stage. Make sure that your stalk diameter and internode length are tight as this results in higher-yielding crops.
How do you limit internode length and get more nodes established early?

We recommend practicing this on a trial basis as there has yet to be a consistent way to track this. Plants that are vigor and energetic seem to have the best results. Lower populations help this as it is all about having the hormonal balance of Auxins vs. Ctytokins.

Is interseeding a good option for weed suppression and nutrient retention?

How do I know if a soybean variety will respond to lower population with more nodes and branching?

In general, lower maturities have less branching and need to keep the population higher. Typically, we see very little to no difference in soybean varieties and population changes until we get lower than 80,000 seeds per acre. We are trying to manage the nodes on a per-acre basis.

What are the implications of later fungicide applications in corn?

We have had high-yield growers apply a fungicide as a follow-up application to the V12 application. If your area experiences issues with southern rust, then a late fungicide application will be beneficial.

Is there a level of potash that should be used as a yearly maximum rate in regards to chlorine-killing bacteria?

Yes. The addition of sodium hypochlorite to water is used as a viral/bacterial disinfectant to control pathogens from exiting the irrigation line and affecting crops. A great alternative for this is Vitamin C. This is a newer chemical method for neutralizing chlorine that would be very helpful. There are two forms that will neutralize chlorine safely – ascorbic acid and sodium ascorbate. Neither are considered a hazardous chemical. Vitamin C doesn’t lower the dissolved oxygen as much as sulfur-based chemicals do. Second, Vitamin C is not toxic to aquatic life at the levels used for dechlorinating your water. Although ascorbic acid is slightly acidic and, in large doses, will lower the pH of the treated water, sodium ascorbate is neutral and won’t affect the pH. Both forms of Vitamin C are stable, with a shelf life of at least one year in a dry form if kept in a cool, dark place. keep in mind that Vitamin C degrades in a day or two once it’s placed into the solution. Sulfur-based chemicals will lower the dissolved oxygen significantly, so we would suggest other options before this. Good old sunlight and oxygen will dechlorinate the water as well.

There is no maximum rate level for potash. Although it is possible, this is dependent on many factors.

How do Zinc and Copper affect yield potential in soybeans?

Zinc has been known to play a hormonal role in soybean development where we suggest keeping it high on early soybeans. Copper is known for disease suppression and aids in the increase of sugar. When you cannot get your nitrogen levels up, we suggest applying molybdenum. Do consider your nitrate and ammonium levels in your soil when applying this.

What’s the best timing for y-dropping on soybeans?

The perfect time frame to y-drop on soybeans is between R2 to R3.5 growth stages to keep the plant completely satisfied.

What are guidelines for foliar feeding micronutrients?

When foliar feeding micronutrients, take into consideration these guidelines:

***Special Note: Add in either a half or full gallon of a Urea based Nitrogen per acre to help with plant absorption and nutrient uptake.

Always be certain you’re not going to see leaf burn. Source your products from suppliers that understand the entire tank mix. Also, always jar test to make sure the mix is compatible.

What is the optimal pH range for soil microbiology and crop production?

Fungi thrive in acidic pH soil environments. Keeping your pH anywhere from 5.7-6.5 is optimal for both microbiology and crop production. From past research, BW Fusion’s MeltDown and Environoc 401 have been shown to work wonders. Turkey litter is a great alternative that can introduce carbon and calcium while also feeding the microbes to increase phosphorus uptake.

Have a question about a topic that isn’t listed above or want to go more in-depth about your field’s results? Book a Consulting Hour to discuss your needs one-on-one with one of our agronomic experts.

Agronomy 365 positions your farms’ nutritional data around your production goals. Become empowered to analyze, understand, and make nutrition adjustments yourself or alongside your trusted agronomist.